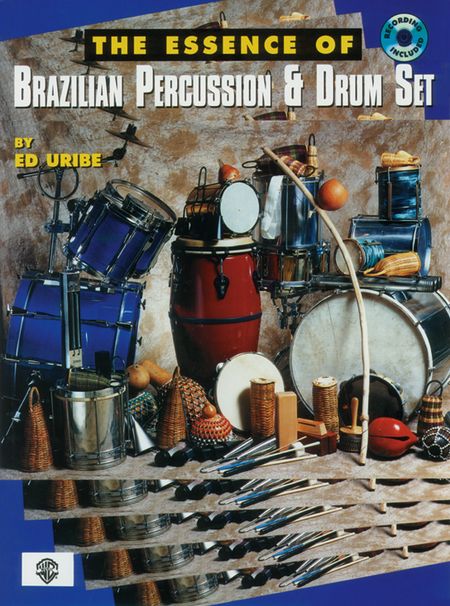 Best books: The Essence of Brazilian Percussion and Drum Set by Ed Uribe

The Essence of Brazilian Percussion and Drum Set

. I’ve been using it almost daily for several months now, and not only is it a model of what a genre book should be, it’s quickly turning into one of my favorite drum books, period. It reads and operates- very appealingly- more like a professional manual than a typical drum book (Ralph Humphrey’s Even in the Odds would be another one with that feeling about it).

In 144 pages it presents a huge amount of information in very concise, manageable chapters. In addition to practice material, there are sections with historical background of Brazilian music and history, notes on sound of the instruments, explanations of the various song styles, examples of rhythm section parts, and a very useful glossary. Styles covered include bossa nova (in 4, 5, 6, and 7/4), samba (in 2, 3, and 7, plus batucada-style, samba with brushes, samba cruzado) , baiao, samba marcha, partido alto, marcha and frevo, choro/chorinho, afoxe, and catarete. With a number of simple but very robust creative methods presented, it has an extremely open system, and I think no two players approaching it would come out sounding the same.

A large portion of the book is dedicated to introducing each of the common percussion instruments used in samba, which is important even if, like me, you aren’t particularly interested in learning to play them all. They are the basis for each of the parts of the drum set grooves, and being familiar with them is one of the keys to playing creatively with any authenticity. That does seem to be Uribe’s major point in including them- he does not give a lot of instruction on how to run or play in a bateria.

In some genre books, there is a fairly inescapable feeling that the user is an outsider to the music, and that a high degree of deference is expected. Rather than presenting the music in a folkloric manner, in which the music is more or less fixed, this book has improvisation at the core of its method; the music is presented as very much a living thing, and though not of the culture, the user is treated as a creator and participant.

One of my few reservations about it is that the unique Brazilian swing feel is handled imprecisely, with only general instructions that are maybe a bit misleading (or which at least require a demonstration)- the essence of Uribe’s explanation is to slur the “a 1 e” of the repinicado rhythm, and “pull back a little on the time”. As you can see from my posts on the subject, my philosophy is that, like with swing in jazz, it should be reduced to something quantifiable and reasonably close– from there it’s a short leap for the player to get to an authentic feel through listening and playing. It’s one of the most difficult subjects related to this music, so it’s an easy shortcoming to forgive, but it would’ve been nice to see the usage and relationships between even 16ths, triplets, and “tripteenths”- all of which occur in Brazilian music- explored and explained more deeply.

But this is a great book- a true player’s book. Highly recommended.