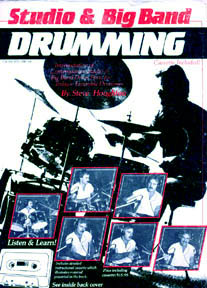 From Steve Houghton’s book Studio and Big Band Drumming, here’s an alternate sticking method for making triplets out of Syncopation. For most people the most familiar method is to play the melody notes— the written rhythm in Reed— with the right hand, and fill out the triplets with the left. I’ll modify that to avoid playing more than two hits in a row with the left, using (as few as possible) alternating strokes. Houghton also puts all of the accents on the right hand, but takes the opposite approach with the inside notes: he plays as many alternating notes as possible, and as few doubles.

Here are a couple of examples, from the first long exercise in Reed, on page 37 in the old edition. The first line as written:

Another line from that page:

These fairly dense examples don’t end up being all that different from the way they would be played using my method; they become much more alternating stroke-dominated when interpreting melodies that have more long notes and rests.