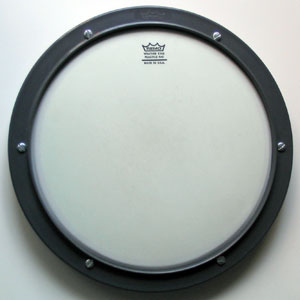 When I first started I used to practice the rudiments while watching TV, I found it boring so TV helped distract me. –Jack Dejohnette

One of the harder things for me to master was the discipline of putting in large amounts of pad practice. In college, when I did my first truly serious practicing, we used to do it standing in the hallway- it would be just you, the pad, Stick Control

, and the textured beige wall. I don’t know why, but sitting down was unacceptable- not cool, a taboo. I could hack it for a maximum of 90 minutes before I had to go do something else- it was just too bloody boring and hard on the feet after awhile. I learned to hate it so much I gave it up all together in favor of working everything out directly on the drums. In recent years I had become more aware of gaps in my technique, and became determined to take another crack at pad work. Now, after five years of hitting it consistently for 90 minutes-4 hours every night, I’m finding that a lot of things I assumed were just my personal technical limitations are not, after all. Here are some tips for making this work for you:

concert snare drum sticks are recommended. Focus least as much on uncomfortable slower and moderate tempos as on fast ones. It’s popular now to practice Moeller-type rebound- and finger-intensive stuff at ff-fff, but I’ve gotten the best real-world results by practicing at a low-to-moderate volume- p to mf- and using a lot of wrist. The tendency for a lot of drummers is to play through the pad like it’s a floor tom with a loose Pinstripe on it- instead play it like it’s a concert snare drum, drawing the (imaginary) sound out. For practicing brushes, the Ed Thigpen brush pad is great.

– Keep the TV or, better, a movie going in the background. Preferably something without commercials, or music/sound effects that are going to compete for your attention. The idea is not to watch TV while, oh yeah, running some exercises- practicing should still be your primary focus. You just want something to string you along through your repetitions of the more dry material. You don’t want to get too engrossed in the plot, so familiar things are good- I’ve watched the Rifftrax commentary version of Titanic a couple of dozen times, for example.

– As an alternative to the metronome, create practice loops from the recordings of your choice. This can easily be done using the excellent free program Audacity. I usually use 4-16 measures  from the intro of the tune- hopefully without drums and/or without a lead voice. I may also make a loop of the entire head of a tune I want to learn or learn better. It takes some care to get seamless loops, with disruption of the time, but it’s worth it. You can also just use complete tracks, of course.

Here are some books I’ve used a lot:
– Stick Control

for practice methods if you aren’t familiar with them)
– Drum Method, Rudimental Swing Solos by Charley Wilcoxon
– Basic Drumming

, Basic Drum Technique and Beyond

by Joel Rothman
– Accent on Accents I

& II by Dahlgren and Fine